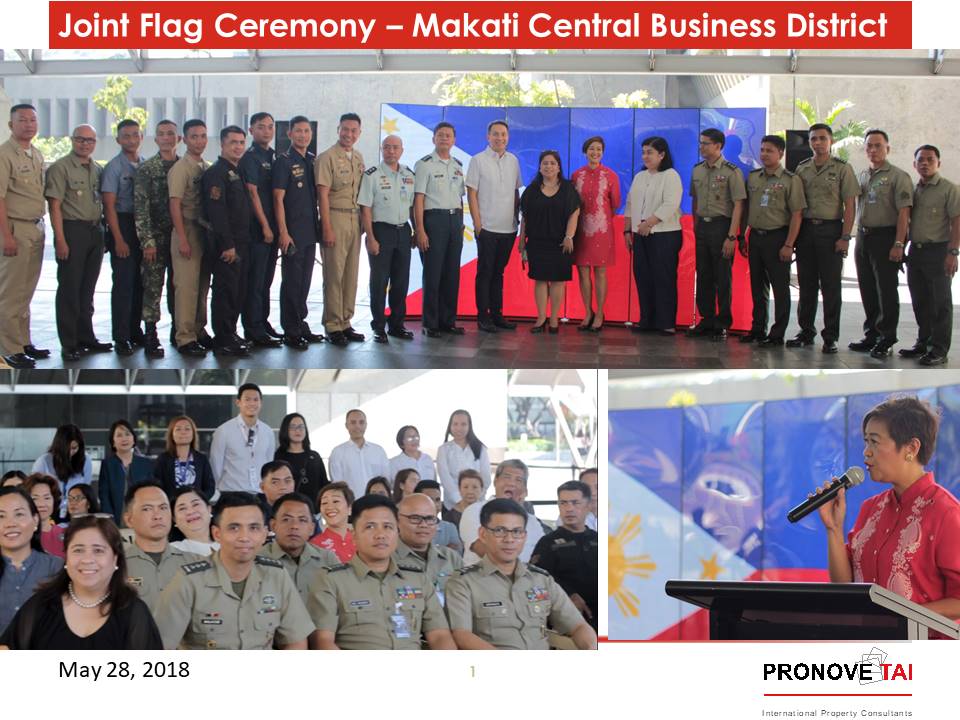 Click the photo above to play #SaluteToACleanFlag 2018 video powered by Haptic PR.

May 28, 2018 PHILIPPINES – On National Flag Day last May 28, representatives from the private sector held simultaneous flag ceremonies synchronized with all government flag ceremonies nationwide. This event was the first in Philippine history when privately owned business districts and residential villages advanced their flag display ahead of June 12 Independence Day and held simultaneous flag ceremonies to celebrate the National Flag Day. This year is the 120th anniversary of the first unfurling of the Philippine flag when General Emilio Aguinaldo unceremoniously unfolded the flag to mark the victory of the Filipinos over the Spanish marines in the historic Battle of Alapan in Imus, Cavite.

Pronove Tai International Property Consultants with the National Historical Commission of the Philippines (NHCP) tapped the Philippines’ foremost real estate developers in this nationwide campaign to raise awareness of this historic date, which sadly, very few Filipinos are aware of.

Pronove Tai CEO Monique Pronove said “This is a significant milestone in the history of the national flag and we are honored to initiate this advocacy on behalf of the private sector”.

“The response and involvement from real estate developers and estate managers had been overwhelming. Pronove Tai only had a week to initiate and influence developers and homeowners associations to organize simultaneous flag raising events, from the day our non-conventional Private-Public Partnership (PPP) on our SaluteToACleanFlag advocacy was signed with the NHCP. Thus, we are very grateful for the full support and cooperation given by our partners, Ayala Land Inc. (ALI), Fort Bonifacio Development Corp.(FBDC), the Araneta Group and the Ayala Southvale Homeowners Association Inc. (ASHAI) in displaying flags in their major estates and holding simultaneous flag ceremonies on May 28. Rockwell Land Corp. and the Filinvest Land Inc. are set to install flags in their estate within the week as well.”

“If we had more time, we could have made this a truly nationwide event where all business districts owned by partner real estate developers will display Philippine Flags and host an 8:00am Flag Ceremony. What is important though is that awareness about May 28 has been started and I have no doubt it will be celebrated better and bigger in the coming years,” she continued.

The SaluteToACleanFlag advocacy was inspired by the battle casualties from the Armed Forces of the Philippines whom the Pronove Tai team met during their Corporate Social Responsibility (CSR) work with the Makati Medical Center Foundation (MMCF). The company invited student musical groups from the private schools of De La Salle Zobel, De La Salle Greenhills and St Scholastica Manila to share their gift of healing through music and had organized four (4) concerts at the V Luna and the Army and Navy General Hospitals in 2016 and 2017.

“While our men in uniform will not hesitate to give their life for our flag, I have observed that civilians in general have neglected our Flag. If not dirty, they are missing from our airports and seaports, coastlines, national museums and other places of interests such as tourist destinations and heritage properties. The flag is not a mere piece of cloth. It is the symbol of our nation and supposedly the most cherished symbol of our country,” according to Monique Cornelio-Pronove.

It was for this reason that during the May 28 celebration in Makati and Bonifacio Global City (BGC), officers and personnel from the Armed Forces of the Philippines (AFP) and Philippine National Police (PNP) were the guests of honor. Representatives from the Army, Air Force, Navy and PNP were present and thanked for, for their unwavering love for country and inspiration they give.

Clean Philippine Flags across the country

“Whilst before, Philippine flags would only be displayed during the June 12 Independence Day week, this year, our real estate developer partners have installed flags as early as May 22 and an abundance of flags can now be seen in the major streets of 14 estates in 10 cities,” said Agnes Mampusti, PR Manager at Pronove Tai.

Throughout the National Flag Month and beyond, Pronove Tai will continue to spread awareness on the importance of respecting the Flag through its proper display. “The vision is to have clean flags hoisted in all private and public buildings, hotels, ports of entry, coastlines and heritage locations across the country. We hope to revive patriotism through visual management and in our capacity as private citizens in the real estate industry, do our bit in promoting the Philippines,” Agnes added.