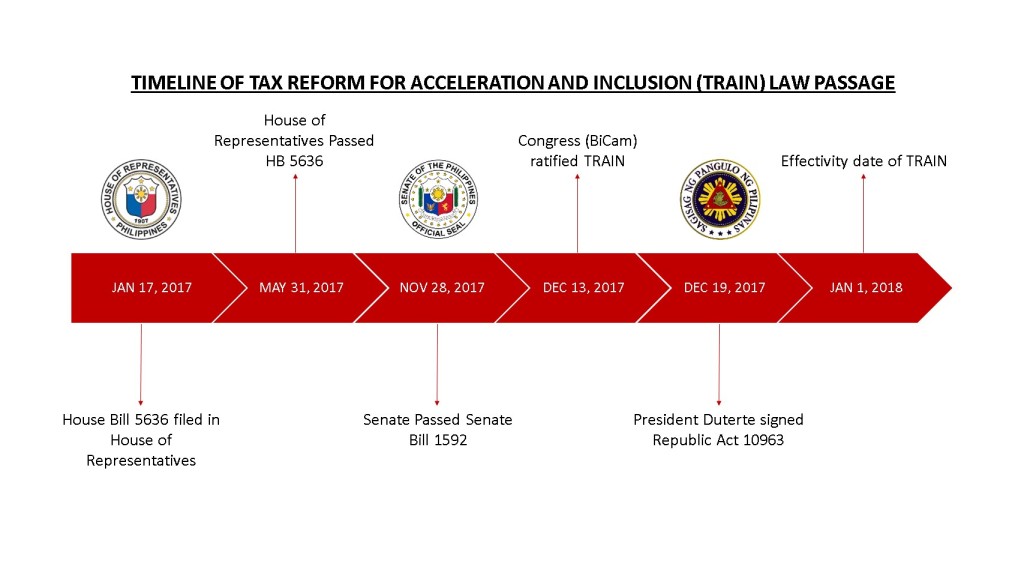 MAKATI CITY, PHILIPPINES December 29, 2017– “We welcome the first package of Tax Reform for Acceleration and Inclusion (TRAIN) Bill or the Republic Act of 10963 as a development to the right direction,” Monique Pronove, CEO of Pronove Tai International Property Consultants said in a statement released a week after Philippine President Rodrigo Duterte signed the bill.

Aiming for a simpler, fairer tax code, the TRAIN comes 20 years after the previous one was put in place. Effective January 1, 2018, cuts on the personal income tax of almost 8 million employees (those earning up to Php 250,000 annually, source: Philippine Statistics Authority) will commence. Also starting on January 1, however, levy on sugary beverages, fuel, cars, and tobacco products will be increased.

As for the real estate industry, while corporate and commercial property taxes were not included in the first package, several provisions would encourage growth.

Infrastructure development and decongestion of Metro Manila had always been two of the cornerstones of President Duterte’s economic agenda. Of the expected Php130B revenue from TRAIN, 70% will be allocated to infrastructure spending including the Build, Build, Build programme. “In general, better infrastructure means more efficient business. If projects to improve our public transportation, bridges and airports will be funded, investors will be encouraged to invest more in the country,” Pronove said.

Meanwhile, 30% will be utilized for social services funding.

Bid for BPO to Stay?

For years, ITBPM (IT Business Process Management) has been contributing to the robust office market in Philippine Economic Zone Authority (PEZA) proclaimed buildings. Aside from having the supply of skilled Filipino talents suited for Business Process Outsourcing (BPO), investors also prefer doing business in the country due to tax exemptions given to them.

In 2017, office pre-leasing from the BPO sector slowed on QoQ basis with limited new entrants coming in to invest in the Philippines. Investments in the sector were put-on-hold while the government’s tax measures remained unclear. In the initial draft of TRAIN, VAT exemptions were scrapped for the BPO sector. This, according to the Information Technology and Business Process Association of the Philippine (IBPAP), would provoke foreign investors to further hold off on investing in the country.

“Ultimately, the TRAIN bill signed by the president on December 19 retained the tax exemption for BPOs. This was the rainbow after the rain,” Pronove added.

“This translates to a saving of up to Php 360,000 for starting families due to the VAT exemption,” Pronove explained.

Outside the National Capital Region, sale of residential dwellings worth Php 2M and below will also be exempted from the 12% VAT. “This provision supports the move to decongest Metro Manila.”

The latest PSA data revealed that young professionals aged 21-35 dominate the labor force at 47%. These young members of the workforce, tend to rent condominiums or apartments near their workplaces.

“They will benefit the most in the VAT exemption for lease of residential units being raised from Php 12,800 to Php 15,000 as well as the removal of VAT on association dues for condominiums,” Pronove said.

Both the estate tax and donor’s tax were simplified to a flat rate of 6% based on the assessed value of the estate property.

Estate tax is levied on the transfer of estate from the deceased person to their lawful heirs. Under the previous system, transfer of estates with a value of Php 200,000 - 10M above was levied between 5-20%. Additionally, with this new law, surviving heirs are allowed to withdraw any amount on the deceased person’s account to cover the expenses related to the estate transfer. TRAIN removed the previous ceiling of Php 20,000 withdrawals and imposition of 6% withholding tax for all the withdrawals.

On the other hand, donor’s tax is levied on transfer of the estate properties by gift or donation. The TRAIN retains exemptions on estates worth Php 100,000 and below and imposed a flat rate of 6% on those estates with value of Php 100,000 and above whether the recipient is related or not. “TRAIN simplified the tax policy by removing the 2-15% tax table as previously used,” said Pronove.

“20 years is a long time, the tax code was definitely in need of a simplification to encourage compliance and increase generation. We remain hopeful that implementation will be done smoothly and efficiently,” Pronove concluded.