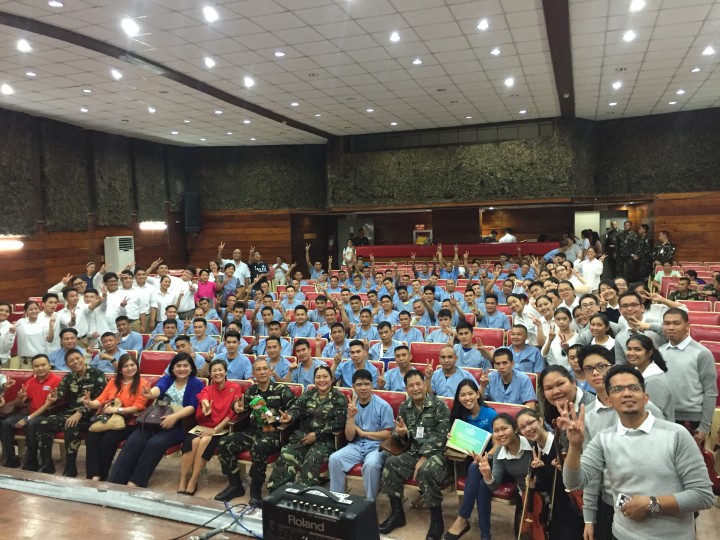 Not a day goes by when music does not make us shiver or bring us to tears. Most of the time, it’s more than the lyrics, songs and the high notes that hit a piece of our heart. Sometimes, it’s simply the moment.

After President Duterte visited the Armed Forces of the Philippines Medical Center (AFPMC), a group of students dedicated their afternoon serenading the soldiers. A simple musical called "straight from the heart" was held in the AFPMC Auditorium with soldiers mostly in their hospital gowns, wheel chairs and crutches. The soldiers were confined with several reasons, some with liver ailments, some ambushed by rebel groups, or in the case of Jerome Jacuba, who lost his eyesight. Jacuba’s blindness was caused by an improvised explosive device that exploded during a military's clearing operation against communist rebels conducted at Barangay Tee Datu Salita, Maguindanao on March 2.

The DLSZ chorale rendered songs such as “Magsimula Ka” by Gines Tan and “Better World” by Ryan Cayabyab that surely fulfilled the soldier’s afternoon. The DLSZ Strings offered upbeat tunes such as “Smooth Criminal” by Michael Jackson, “Uptown Funk” and “Just the way you are” by Bruno Mars that surely inspired the soldiers’ afternoon. Jerome Jacuba entertained the entire auditorium by his own rendition of Gary Valenciano’s, “Warrior is a child”. His positivity and humor brought more than what the soldiers relished in an afternoon celebration like no other.

The event ended with a heartfelt performance of “If We Hold on Together” by Diana Ross where everyone held hands. The event takeaway lesson will give us hope and be reminded of the terrible cost of war and the perseverance of the human spirit. At the end of the day, what we all want is peace and to spread the message that Peace is Possible. The time shared with the wounded soldiers, and the joy everyone felt, will be treasured for a lifetime.

Students in general go through day by day with their lectures and how they are molded in school to achieve their goals. We should also nurture them with values by means of teaching them character education, a method which fosters the development of ethical and responsible individuals by teaching them about good values. It teaches the students the values of caring about other people. In this event, it is an eye opener for the students to have a glimpse of what our beloved Filipino soldiers are fighting for.