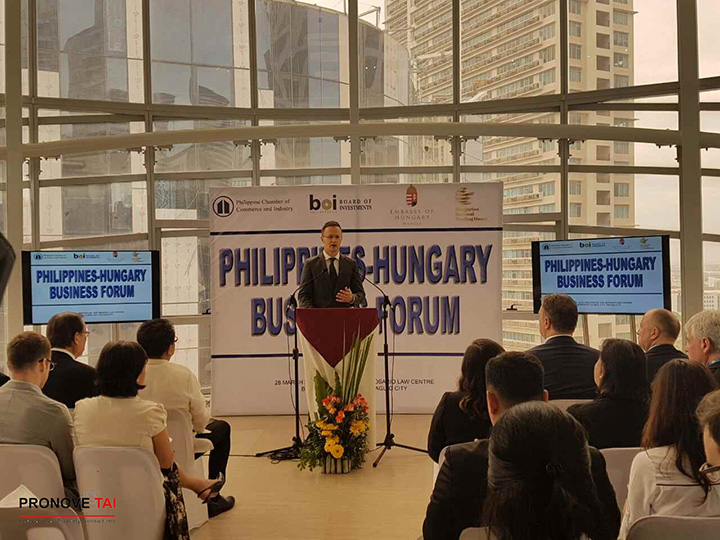 Pronove Tai CEO Monique Cornelio-Pronove attended the re-opening of the Embassy of Hungary in the Philippines at the DelRosarioLaw Centre in Bonifacio Global City. After 22 years, Hungary once again re-established its presence in the Philippines and the ASEAN region as well. Ambassador József Bencze shared his country's vision of a broader cooperation and closer relationship with the Philippines where both countries benefit from technical and research exchanges and expanding trade in agribusiness, food and beverage, renewable energy, ICT, infrastructure development and water management. Ambassador Bencze also recognized Ambassador Alfonso Yuchengco III, the Honorary Consul General of Hungary, for his valuable contribution to the continuing goodwill between the two countries. Hungary’s Minister of Foreign Affairs and Trade Peter Szijjártó, in an earlier statement at a courtesy call to President Duterte in Davao City, expressed Hungary’s keen interest in pursuing greater economic cooperation through free trade agreements between Hungary and the Philippines. Today, to echo the words of our friends from Hungary, was a celebration of a new world order where those who are honest and brave will emerge as winners.

Pronove Tai worked closely with the Embassy of Hungary in the latter's search for a suitable location. The DelRosarioLaw Centre was chosen as the best property to host the diplomatic office due to its quiet niche and yet close proximity to commercial and residential developments within Bonifacio Global City. The building is home to the Del Rosario & Del Rosario Law Offices, recognized as one of the most respected and trusted law firms in the country specializing in maritime law. It is also host to many other distinguished tenants, which include the Embassies of Sweden and Norway.

Related: Pronove Tai welcomes The Embassy of Hungary in the Philippines to DelRosarioLaw Centre

Why invest in the Philippines?