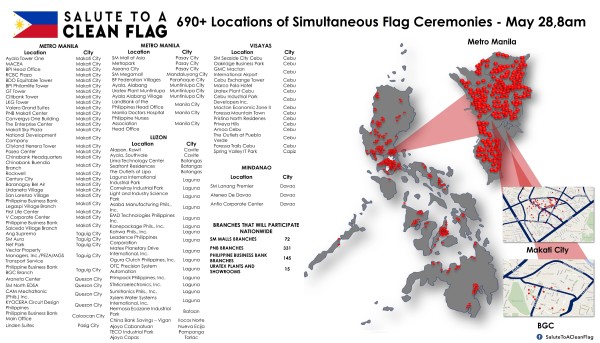 PHILIPPINES – In a momentous display of unity, over 130 private companies, industry associations, and residential villages held simultaneous flag ceremonies on May 28, National Flag Day in more than 690 locations nationwide. Joining all government offices in Luzon, Visayas, and Mindanao – the event was held as part of #StopAndSalute, a project of the Salute To A Clean Flag Movement promoting the country’s foremost symbol.

“From only five property developers last year, the joint flag ceremony has reached 132 private sector participants across the country. It was a showcase of the commitment of our partners in contributing to our efforts to reignite nationalism. We hope that this is just the start of a long-term initiative in nation building,” STACF Founder and Pronove Tai International Property Consultants CEO Monique Pronove.

On the grounds where the first unfurling of the flag was done in Alapan, Imus, Cavite, the Philippine Flag was also raised at exactly 8am. John Arcilla, veteran actor known for his portrayal of Heneral Luna led the Pagpupugay and singer Bayang Barrios gave an emotional rendition of the National Anthem.

from L-R: Bayang Barrios, Monique Pronove, and John Arcila at the historic site of Alapan - where the first unfurling of the Philippine Flag was done. Photo courtesy of Mayor Emmanuel Maliksi's FB Page

Inspired by the battle casualties of Marawi who would pour in all their efforts to standing for the Philippine Flag, Salute To A Clean Flag Movement is a non-political, private sector-led initiative that aims to spark renewed respect and love for the Philippine flag, through the reeducation of the private sector in proper and visible flag management.

Since the advocacy started on May 28, 2018 as a Corporate Social Responsibility (CSR) project of Pronove Tai International Property Consultants, Pronove Tai along with the National Historical Commission of the Philippines, Salute has evolved as a truly nationwide citizen movement with core partners - PerkComm, Haptic PR, Vitamin B brands, Gulapa Law as well as individual advocates Atty. Tess Herbosa (former Securities and Exchange Commission Chair and a descendant of Jose Rizal and the niece of Delfina Rizal Herbosa de Natividad—one of the three women who sewed the Philippine flag in Hong Kong in 1898), acclaimed veteran actor John Arcilla, and volunteers Mara Juliano, Zac Faelnar, and Liz Franco.

“On behalf of the STACF team, we thank everyone who joined us and may we remember to embody the virtues our Flag symbolizes – liberty, equality, valor, peace, and truth.”