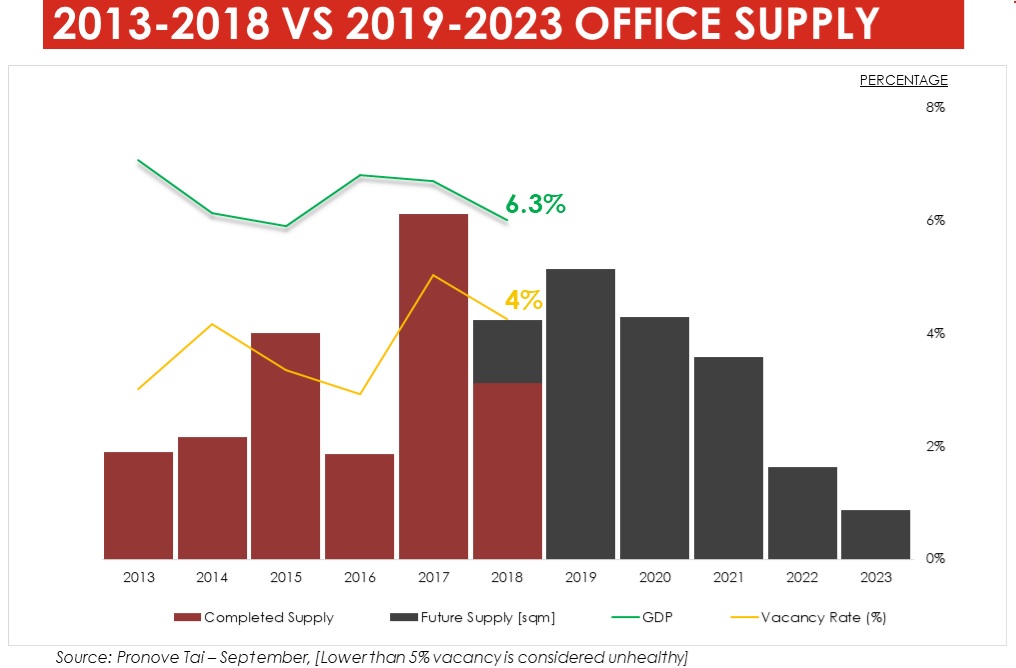 MAKATI CITY, PHILIPPINES  November 7, 2018 – “It has been a strong year so far for the office market. The next five years also look encouraging and will open up potentials in the future of the industry,” Pronove Tai International Property Consultants’ CEO, Monique Pronove said at the Q3 2018 Metro Manila Office Market Overview today.

As Pronove Tai projected at the start of the year, the office stock grew by only 2% QoQ at an additional supply 180,000 sqm or 7 completed buildings. Taguig City contributed to almost half of this 3Q supply at 86,000 sqm. “Through the first three quarters, we have been seeing 100% construction delivery. For investors and for the end-users, this is a good trend that would hopefully continue as this builds confidence and reliability,” Pronove said.

In terms of growth, the cities of Taguig and Mandaluyong were the fastest at 4% QoQ. Out of all the Metro Manila Office Districts only Ortigas Center recorded no growth while still remaining as the third largest district, following Makati City and Taguig City.

The months of July to September saw little movement in terms of vacancy which remained at 4% QoQ. “Only Taguig posted a healthy vacancy of 5% which can be attributed to its large completed supply in the quarter. The vacancy rate of the districts of Bay Area, Makati and Ortigas Center meanwhile continued to dwindle,” Pronove added. The three districts vacancy levels are at 0.1%, 1%, and 3%, respectively.

Quezon City and Mandaluyong City are the districts with highest vacancy at 11%.

ITBPM transactions made waves in the third quarter. Notable lease transactions include huge multinationals such as JP Morgan, Thomson Reuters, WNS Global Services and Alorica. “While it helped that the Filipinos continue to upskill, it certainly did not hurt that the TRABAHO Bill has been postponed,” Pronove observed.

The strong showing of ITBPM was evident in the Philippines’ improved ranking in Tholons’ Global Services Index 2018. From dropping to third last year, the Philippines moved up to regain its No. 2 ranking behind India.

Offshore Gaming is not going away

While ITBPM contributed to 42% of the demand, OffShore Gaming was at 26% or 82,000 sqm of the actual transactions in Q3. Following the top 2 are Traditional Offices at 24% and Flexible Workspaces at 8%.

“Philippine Offshore Gaming Operators (POGO) is a steady second demand driver,” Pronove Tai CEO said. POGO take up increased 61% QoQ, from 51,000sqm in the previous quarter. To date, in addition to Bay Area (Pasay and Paranaque) and Makati, the cities of Las Pinas, Muntinlupa, and Mandaluyong issue Letters of No Objection (LONO) or Resolution of No Objection (RONO). POGO had such a strong demand that it was the main reason behind Bay Area’s tight vacancy. In fact, of the actual transactions in 3Q for Offshore Gaming, 72% went to the Bay Area.

Opportunities Abound in the Bay Area and Muntinlupa City

The Bay Area recorded a staggering 0.1% vacancy during the third quarter, while Muntinlupa City was at 4%. “These 2 areas are districts to watch out for. For the Bay Area, rental growth rate is at 17% YoY,” Pronove said. “With roughly 200 hectares of reclaimed land untapped, there is still a lot of opportunity to grow there.”

Another district prime for investment is Muntinlupa City. For the growing number of foreign immigrants, the city already has an existing community of townships, residential condominium units, and retail establishments. “Availability of land coupled with connectivity to the manufacturing hubs in Calabarzon area show great potential for developers, investors, and occupiers alike. Quality infrastructure in the area such as the MCX (Muntinlupa-Cavite Expressway) has made the city easily accessible.”

“The good news is that the opportunity to grow is not only isolated to these two business districts and to the POGO sector. We observed that the last five years were characterized by rapid economic growth at an average of 6.4% GDP growth,” Monique Pronove added. “At an average of 650,000 sqm new supply, as against an average of 800,000 sqm demand, vacancy levels were averaging a low 2.5% to 4%. We therefore did not have the capacity to accommodate the strong demand.”

“The key beneficiary of a strong economic growth is always the office market. With continuing projection of an average 6.7% GDP growth in the next five years, and only 600,000sqm of projected supply, we need more office space to be developed as evidenced by pre-leased developments as far as 2021. To sustain this growth, the government should improve ease of doing business and efficiently complete the roads, bridges, and airports in the country.”