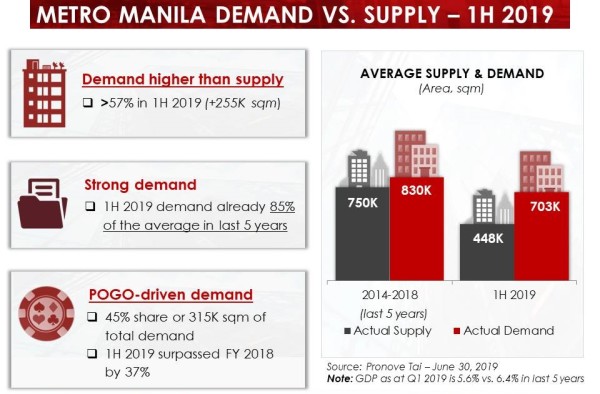 
From Beleaguered to Accepted

“Whilst in the past 2 years, the offshore gaming operators were beleaguered due to the lack of clear regulatory environment which virtually turned this type of occupier into a pariah in the business community, this year has significantly been different. More and more landlords and local government units have warmed up to having them as tenants. Proof of this is the increase in leasing transactions accounted for by the POGOs during the 1st half of 2019. Of the 703,000 sqm of office space transacted, 45% was taken up by POGOs while the Traditional office and ITBPM lagged behind at 28% and 26%, respectively”, Pronove commented.

From only three LGUs giving Letters of No Objection (LONOs) to POGOs in 2016, there are now seven cities in Metro Manila issuing this document required by PAGCOR (Philippine Amusement and Gaming Corporation) for POGOs to locate in its areas. These cities include Makati, Pasay, Paranaque (the three city pioneers), Mandaluyong, Las Pinas, Muntinlupa and just recently Quezon City by way of Special Use Permits (SUPs). To-date, Taguig City is still not issuing LONOs to POGOs but hosts the largest ITBPM locators in the country and remains to be its preferred district.

ITBPM demand dropped from No. 1 to No. 3

For the first time after 18 years, the ITBPM sector which consistently topped demand has dropped to Number 3 in the demand ranking, behind POGO and Traditional Office occupiers in the first half of the year, according to Pronove Tai.

The markedly slow Presidential Proclamations of office buildings as PEZA zones for the past three years coupled with the seasonally low demand from this sector during 2Q has contributed to its lower take up. “There is also still TRABAHO Bill which causes uncertainty among the industry,” Pronove added.

According to Pronove Tai, “The moratorium order issued on June 17 banning economic zone proclamations in Metro Manila has exacerbated the situation for the ITBPM market. While decentralizing demand to suburban areas is commendable to provide impetus for growth in other areas, the government should provide a business-friendly environment across all locations where businesses have the flexibility and support to choose where it deems fit to expand based on its own parameters”.

“The ITBPM is still a very significant sector in this market. It occupies 35% of all office stock in Metro Manila or approximately 3.9m sqm of space. In the past two years, its average annual demand is 425,000 sqm in an environment where the average supply is 1m sq.m. per annum. While we forecast the POGO sector to double its space this year, a diverse tenancy mix is always a success formula, thus we suggest the government to rethink its moratorium order,” Pronove said.

Vacancy levels remained at a healthy 6% across the National Capital Region – with a welcome improvement for Mandaluyong City at 8% from 11% last quarter. Quezon City retained 12% vacancy but would have increased to 14% if not for the offshore gaming leases in the area. “Since early 2018, we have been saying that districts with high vacancy specifically Quezon City, should consider opening up to POGO (Philippine Offshore Gaming Operators). QC’s local government now issues SUPs (Special Use Permits) essentially allowing the offshore gaming players to locate there.”

“Taguig City office buildings have been the best performing investment asset posting the highest rental growth at 9%. The average monthly rental in the area is Php1,340/sqm/month.  Makati City is still the most expensive business district at Php 1,590/sqm/month for Grade A buildings.”

Pronove Tai projected 55 buildings or 1.1m sqm supply (new buildings completed) by the end of the year. As at end of June 2019, approximately 450,000 sqm were delivered or 42% of total projected supply.

“At 703,000 sqm of actual leased transactions during the first half, we are confident that demand will meet, if not surpass last year’s record take up. In fact, this mid-year performance is already 85% of the demand average in the last five years.”