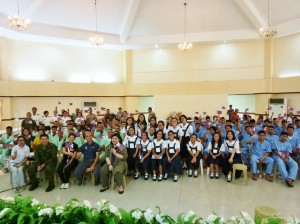 TAGUIG CITY, PHILIPPINES  August 15, 2017 – Elton John probably said it best when he said, “Music has healing power, it has the ability to take people out of themselves for a few hours.” Inspired by this belief that music heals and by the concert series headed by current Cultural Center of the Philippines Director Nick Lizaso for the cancer patients of the Philippine General Hospital, Pronove Tai International Property Consultants organized a National Heroes Day Concert for battle casualties at the Army General Hospital today.

For these soldiers who put their lives on the line and are used to leading active lifestyle, being immobile and confined at the hospital are no walk in the park. To help bring them joy and healing through music, Pronove Tai, along with the Makati Medical Center Foundation, brought the music ensemble clubs of St. Scholastica’s College (SSC) Manila to serenade the battle casualties. It was a day filled with inspiring and heartwarming interaction between the students and the solders with one SSC student being quoted as saying,

"I've always dreamed of meeting a superhero and today, that dream has come true."

With over 150 in attendance, soldiers from the Philippine Army and the Philippine Navy who were among the wounded from the ongoing armed conflicts in various parts of the country but largely from Marawi, spent the day watching the performances, receiving raffle prizes and having a meet and greet programme with the students. The school’s Grade School Rondalla and Ethnic Ensemble as well as the Junior and High School Glee Club and Music Ensemble collaborated to bring a 21-piece set to entertain the crowd who met their every song with the biggest smiles and thunderous applause.

For the courageous men and women who had fought to protect our country, the time, talent and support shared by the students were highly appreciated and cherished. For the students, it was a real eye-opener to meet people who embody values of nationalism, bravery and perseverance. For the organizers especially Pronove Tai, teaching the youth the value of caring for others and using their talents in reaching out to fellow men is at the core of its Corporate Social Responsibility programme.

Messages Straight From The Heart: Scholastican giving a message jar with the St. Benedict Medal to the battle casualties ©Philippine Army

As a perfect conclusion to the meaningful day, all the SSC Manila performers gave a rendition of Heal The World while mason jars filled with heartfelt were distributed to the battle casualties. The jars were made extra special by the medal of St Benedict (twin brother of St. Scholastica) which is believed to impart protection to its wearer.

The event was made possible in collaboration with the Army General Hospital and with support from Southern Institute of Maritime Studies (SIMS), Goudie & Associates, Smart, 8Period Travel & Tours and Jesus Reigns Christian Academy.