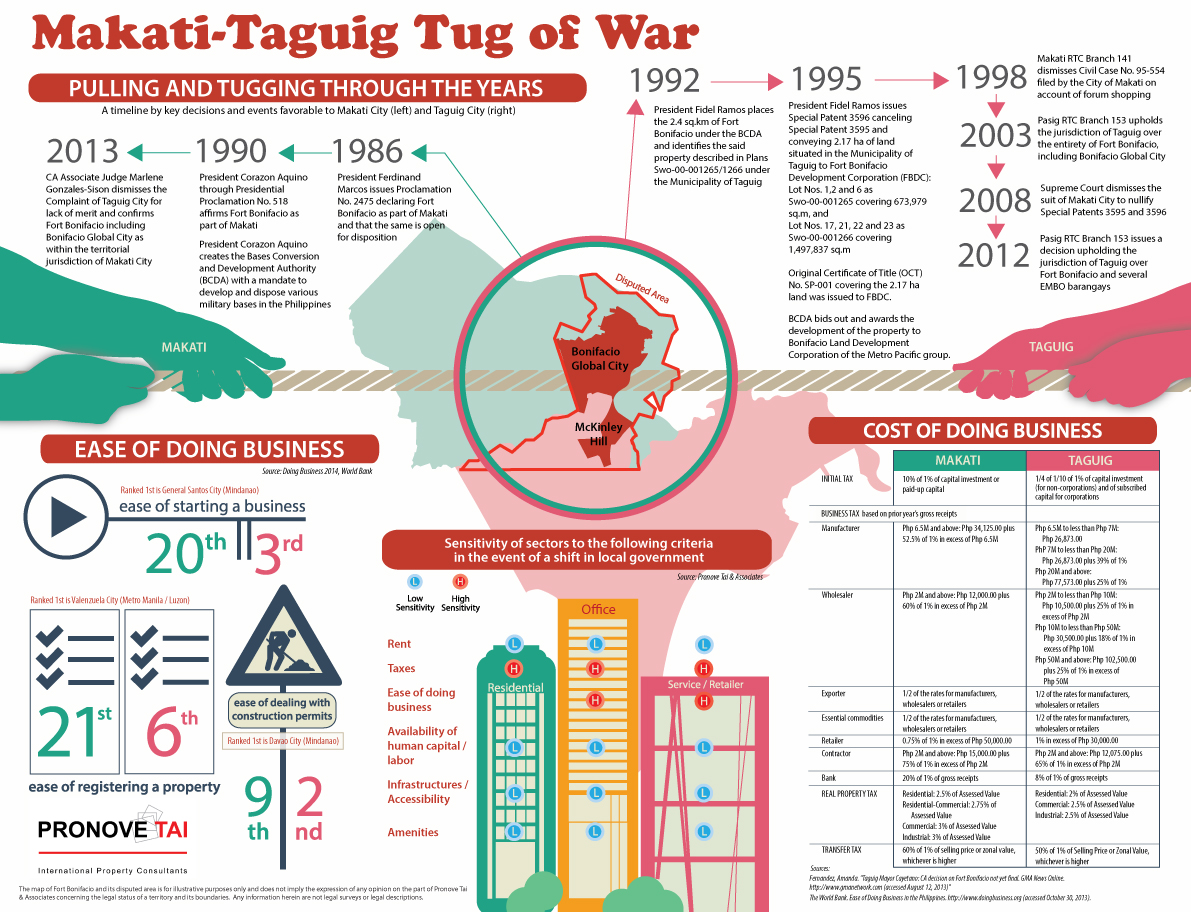 The decades long territorial dispute of Makati and Taguig Cities over the Enlisted Men’s Barrio (EMBO) Barangays and Inner Fort Barangays or the “Disputed Area” filled the headline news mid this year when the Makati Local Government Unit (LGU) asserted its claim, following the Court of Appeals ruling that the same is within its territorial jurisdiction.

The Disputed Area is bounded by the following landmarks:

and includes the much coveted prime business district of Bonifacio Global City (BGC) and McKinley Hill, the EMBO residential districts and Inner Fort Barangays as shown in the map.

This 18-year old redevelopment of the former military base is now home to approximately 700,000 sq.m. of completed prime office buildings and approximately 19,200 units of residential condominium towers among other locators which includes  an international standard hospi-tel (hospital-hotel), high-end strip mall, the country’s first science museum  and international schools.

BGC also plays host to five (5) of the world's largest Business or Knowledge Process Outsourcing (B/KPO) companies such as Deutsche Bank KPO, Logica Philippines, Hongkong Shanghai Banking Corporation (HSBC), Sutherland Global Services and JP Morgan Chase Bank. Over the past ten (10) years, the district has attracted numerable relocations from the Makati CBD as newer and more energy efficient buildings have been completed providing better options for tenants to choose from, at discounted rental rates over Makati. Major hotel investors including the Shangri-la Group and Grand Hyatt Hotel have poured in investments and are both undertaking massive construction in the area.

By the end of July this year, the Court of Appeals (CA) dismissed the complaint of Taguig LGU against Makati LGU for lack of merit and confirmed that the Disputed Area is within the territorial jurisdiction of Makati City. It has also ordered Taguig City to immediately cease and desist from exercising jurisdiction within the disputed area and return the same to Makati City.

For a better understanding of the history of Fort Bonifacio, we present a timeline of the milestones and important events leading to the Court of Appeals (CA) Ruling.

To-date however, the Taguig LGU continues to govern over the disputed area as it has filed a motion for reconsideration with the Court of Appeals. Thus, business and property taxes as well as permits are dispensed by the said LGU. Anecdotal evidence from investors and end-users alike are unperturbed with this tug-of war as it points to “politics as usual” with an expectation that this dispute will be long drawn.

Implication in the event of a shift in local government jurisdiction

The implication to the property market has been nil so far with no immediate changes in the business decisions of potential tenants and investors considering BGC. In the medium to long term, we have assessed the sensitivity of the different property sectors to criteria such as:

a)  Total Occupancy cost including rent, service charges and utilities

b)  Property and business taxes

e)  Accessibility to infrastructure such as public transportation, telecommunications and power

f)  Availability of supporting amenitiesThe sensitivity table is presented below.

Figure 1. Sensitivity of the property market in the event of a shift in local government

The top three (3) primary considerations in choosing a location notably:

2. Access to infrastructure including public transportation, power (and redundancies) and telecommunications and

will continue to be BGC’s competitive advantage and will augur well for its continued marketability. But the biggest impact in the shift of local government jurisdiction will lie in the investment cost and operational costs of businesses as it pertains to taxes and ease of doing business.

Whilst Makati is indeed the Philippines’ Central Business District (CBD), it will do well for its competitiveness if it will be sensitive to its World Bank ranking in Ease and Cost of Doing Business and make the adjustments where necessary.

The World Bank. Ease of Doing Business in the Philippines. http://www.doingbusiness.org (accessed October 30, 2013).

Historical timeline was developed from the following sources: