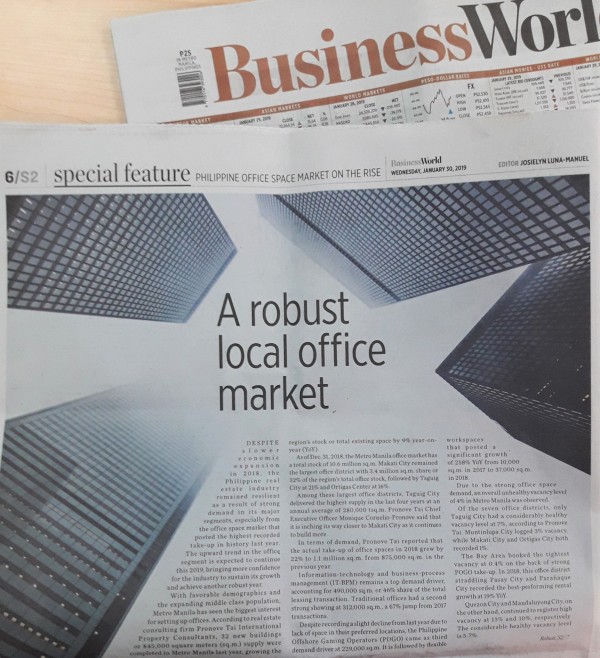 Despite slower economic expansion in 2018, the Philippine real estate industry remained resilient as a result of strong demand in its major segments, especially from the office space market that posted the highest recorded take-up in history last year. The upward trend in the office segment is expected to continue this 2019, bringing more confidence for the industry to sustain its growth and achieve another robust year.

As of Dec. 31, 2018, the Metro Manila office market has a total stock of 10.6 million sq.m. Makati City remained the largest office district with 3.4 million sq.m. share or 32% of the region’s total office stock, followed by Taguig City at 21% and Ortigas Center at 16%.

Among these largest office districts, Taguig City delivered the highest supply in the last four years at an annual average of 280,000 sq.m. Pronove Tai Chief Executive Officer Monique Cornelio-Pronove said that it is inching its way closer to Makati City as it continues to build more.

Information-technology and business-process management (IT-BPM) remains a top demand driver, accounting for 490,000 sq.m. or 46% share of the total leasing transaction. Traditional offices had a second strong showing at 312,000 sq.m., a 67% jump from 2017 transactions.

Despite recording a slight decline from last year due to lack of space in their preferred locations, the Philippine Offshore Gaming Operators (POGO) came as third demand driver at 229,000 sq.m. It is followed by flexible workspaces that posted a significant growth of 258% YoY from 10,000 sq.m. in 2017 to 37,000 sq.m. in 2018.

Due to the strong office space demand, an overall unhealthy vacancy level of 4% in Metro Manila was observed.

Of the seven office districts, only Taguig City had a considerably healthy vacancy level at 7%, according to Pronove Tai. Muntinlupa City logged 3% vacancy, while Makati City and Ortigas City both recorded 1%.

The Bay Area booked the tightest vacancy at 0.4% on the back of strong POGO take-up. In 2018, this office district straddling Pasay City and Parañaque City recorded the best-performing rental growth at 19% YoY.

Quezon City and Mandaluyong City, on the other hand, continued to register high vacancy at 13% and 10%, respectively. The considerable healthy vacancy level is 5%-7%.

“We would like to draw attention to Quezon City which ended 2018 with the highest vacancy,” Ms. Cornelio-Pronove said, noting that the city is slated to deliver the highest supply of 343,000 sq.m. of new office buildings developed largely by SM, Ayala, Eton, and Araneta Group in 2019.

“As such, we see rents and capital values in the district to be pressured,” she said.

Read the rest of the story here: https://www.bworldonline.com/a-robust-local-office-market/