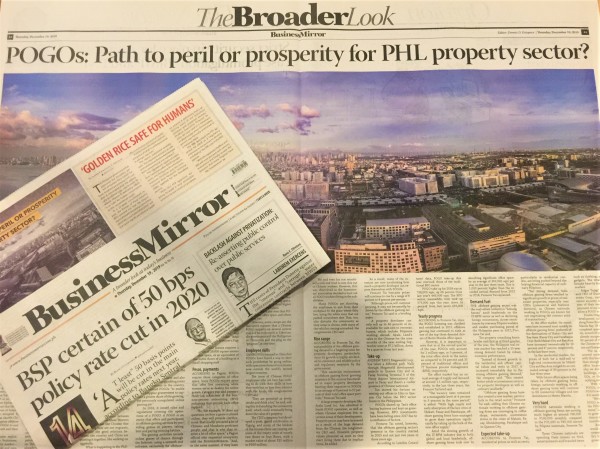 Via BusinessMirror: POGOs: Path to peril or prosperity for PHL property sector?

ACCORDING to Pronove Tai, the sustainability of the offshore gaming demand is a lingering issue for property developers, particularly since its growth is highly attributed to consistent and reliable policy and regulatory measures by the government.

“This uncertain environment in offshore gaming firms’ growing existence in the country has resulted in major property developers limiting their exposure to POGOs to an average of 8 percent to 12 percent of their total office space portfolio,” Pronove Tai said.

A large property developer like Ayala Land Inc. has admitted it limits POGO operation, as well as where Chinese employees live, in certain areas of their development.

Property prices may have increased as a result of the huge demand from the Chinese, the conglomerate CEO said. However, property values plummet as soon as they start living there due to implications, he added.

As a result, many of the investors are now scrutinizing how much a property developer can expose themselves with POGOs.

Pronove Tai forecasts prices will continue to rise by a range of 6 percent to 8 percent per annum.

“Although prices will continue growing, it may not necessarily be driven by the offshore gaming sector,” Pronove Tai said in a briefing paper.

A property developer can only sell up to 40 percent of its available for-sale unit to overseas buyers, which include Filipinos working abroad. Ayala Land’s sales to the Chinese for the nine months of the year ending September were at P7.1 billion, down by a quarter from last year.