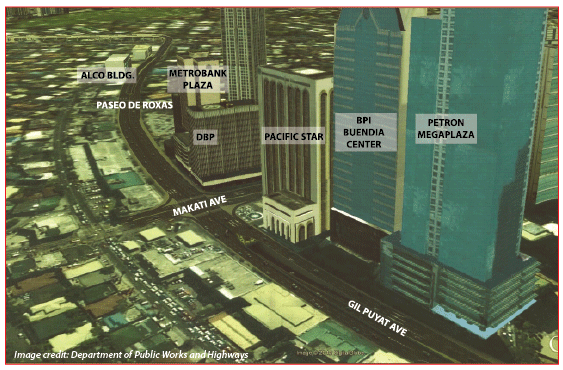 For commuters and drivers going to Makati City, a typical workday is planned around heavy traffic. Travelling even short distances within the city can take half an hour to several hours, with some roads seemingly in a constant traffic jam.

There are, however, several bright spots on the horizon for Makati's traffic woes but as the Department of Public Works and Highways (DPWH) and the Metropolitan Manila Development Authority (MMDA) warn, motoring around will be harder before it gets easier and better. Soon to begin is the Sen Gil Puyat Avenue – Makati Avenue – Paseo de Roxas underpass project envisioned to eventually ease traffic in one of the most congested corridors in the city. The project is simply referred to as Buendia Underpass Project, owing to the name Gil Puyat Avenue formerly went by.

The Buendia Underpass Project is a Php 1.27 billion solution to address the traffic build-up at the intersections of Paseo de Roxas and Makati Avenue. Using the innermost lanes of Sen Gil Puyat Avenue, the 4-lane underpass will be 880 meters long with a covered tunnel spanning 570 meters.

140-meter approach from the west toward Makati Avenue

Construction of the Buendia Underpass will be undertaken in 2 phases. The first phase will close off the intersection of Makati Avenue and Sen Gil Puyat Avenue (Buendia Avenue), and closure of the Paseo de Roxas intersection will follow in the second phase.

The MMDA has posted a video advising motorists of alternative routes around the project site to their destinations. Route maps can be found below.

Start of Phase I construction expected in June

The DPWH expects construction to start, with road widening, at the last week of June. Two lanes on each side of Buendia Avenue will remain open for road traffic. However, expect possible road closures during Phases I and II next year when tunnel work starts. According to the DPWH, closing of roads will last for, at least, 15 days per intersection.

The estimated duration of the Buendia Underpass Project is 22 months.